The president of Universidad Francisco Marroquín, Gabriel Calzada, introduces the College Freedom Forum, by telling a story about the origin of human rights that came after the discovery of America. He shows his greetings to the visiting activists that came to share their stories, to The Human Rights Foundation (HRF), and the new sponsor LGBTQ for Freedom.

Then Javier El-Hage, the legal director of the Human Rights Foundation, presents the people and organizations that make this event possible in Guatemala and describes some of the work that the HRF does.

“Freedom is great, everyone on the left and right agree on freedom, but it takes people that are willing to risk their lives and everything to put a picture to it, to make it material, to make it something real.” - Javier El-Hage

El-Hage explains that they specialize in authoritarian countries, and gives some examples of Latin American countries that are suffering because of their authoritarian regimen. Then, he mentions the political problems of countries such as Bangladesh, Eritrea, and Afghanistan which are some of the native countries of the activists presenting in the College Freedom Forum 2020.

To conclude, he points out the sacrifice that activists make to fight for freedom, and introduces, Vanessa Tsehaye from Eritrea, which reveals some of the oppressive life that has developed in her country, making it one of the most censored countries in the world. She also shows her appreciation to everyone that makes this event possible to speak about liberty. 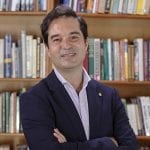