Afghanistan is a country where women are repressed because of their religion, they don’t have the same rights and opportunities as a man. The first female CEO in Afghanistan, Roya Mahboob, came to the College Freedom Forum to share her journey as an entrepreneur and express the impact that a dream can cause in a country.

Mahboob describes how education is for women in Afghanistan, how she lived with fear but never lost hope of getting an education. This gave her the courage to go to places that other women in her culture never would, like to a cybercafe where she saw a computer for the first time.

Roya commented that she was lucky to have her father, he always supported her to get the education she wanted despite the oppressive culture, and how this helped to make technology the center of her career, but, had to leave the country because of the success of her work.

My journey as a CEO was made of obstacles, I believe that those obstacles are the things that made me who I am today, they are building blocks of the things that I had to overcome to become who I mean to be.”

Then, Mahboob explains that after achieving her dream, she had a new one, of making education available for everyone, even for those who are living in conservative countries. With this goal, she and Digital Citizen Fund have reached over 15,000 girls and women in which more than a hundred became entrepreneurs.

Roya reveals the story of how a group of Afghan girls, who were in a robotic team for an international competition, got their visas denied by Afghanistan. So, they captured the attention of a US congressman as well as the White House and achieved getting their travel documents. This public competition led to a message of hope and inspiration for a new generation of girls in Afghanistan.

It might seem like a big goal, but if you don’t have the courage to lead and fight for something different, nothing will ever change”.

She shows that this event made the Afghanistan government invest in a campus that its main focus will be on the development of a long-term ecosystem of startup businesses led by women. Also, this project will enable these professionals to work in a society where economic inclusion is a norm, proven that after years of darkness, you could be the master of your destiny.

To conclude, Mahboob emphasizes that innovation can be found anywhere, that now the new generations of Afghanistan will have something to offer to the international community, thanks to the education and connectivity that technology can bring. 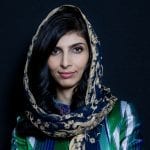